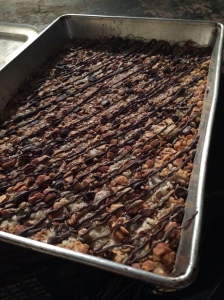 These may well have been the biggest hit at any Wine and Unwind ever. 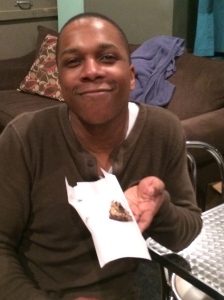 These bars are so simple to make, and are gluten-free AND can easily be made dairy-free/vegan as well.  They’re win win win for any gathering.   Just don’t try to reduce coconut milk and sugar yourself because this is what happens:

Actually, the photo doesn’t do the tragedy credit — James tried to make the first batch vegan, but didn’t have any sweetened condensed coconut milk on hand.  So ever the problem solver, he tried reducing coconut milk and sugar down into a thick, syrupy vegan dulce de leche sort of thing.  But it was late and after about an hour and a half of cooking and stirring, he just poured it on the crust.  Only a few middle pieces didn’t burn!  I only share this so that you know that even the Backstage Baker has his share of baking tragedies.  Luckily, he lives in New York City and can get anything at anytime — yes, even sweetened condensed coconut milk at 2am — so he was able to make a fresh batch.

Ensemble member Thayne Jasperson helping himself to a piece, with Daveed Diggs, who plays Lafayette/Thomas Jefferson, in the background opening champagne.

(inspired by The Gluten Free Goddess)

2.  Place the butter in a 9×13-inch baking pan and set it in the oven until the butter is melted. Tilt the pan to coat the bottom evenly.

3.  Toss the cookie crumbs in the buttered pan until they are completely coated with butter.  Press them into an even layer on the bottom of the pan. Pour the condensed milk on top of the cookie layer. Then add a layer of chocolate chips, a layer of coconut, a layer of almonds. Using the back of a spatula, press the mixture firmly into the pan.

5.  Cool completely on a wire rack. Chill thoroughly before cutting.  James drizzled chocolate over the top for an extra festive fillip.