The Backstage Baker has, as usual, gone from one show, Broadway’s “Farinelli and the King,” directly to another, “Othello,” the Public Theater’s first Shakespeare in the Park offering this summer.  Directed by Ruben Santiago-Hudson (whom fans of this blog will know from our “Jitney” posts), “Othello” stars Chukwudi Iwuji as Othello, Heather Lind as Desdemona and Corey Stoll as Iago.  You can learn about ticket options here.

“Othello,”  in my humble opinion, is Shakespeare at his best.  In fact, my English professor mother thought so too, and in 1963 wrote one of the first academic treatises about Desdemona from the perspective of feminist.  Entitled “The Indiscretions of Desdemona,”  this essay was apparently quite ground-breaking in its time.  Here’s the JStor link. If you read it, do tell me what you think in the comments section below.

But, back to the napkin:  it’s an essential prop that drives the plot forward.  Othello gives it to Desdemona, Iago convinces his wife Emilia to steal it, Iago plants the hanky in Cassio’s bedroom and Othello thinks Desdemona is unfaithful — without that napkin there would be no story!!

Here’s a speech from the play about said napkin:

I am glad I have found this napkin.
This was her first remembrance from the Moor,
My wayward husband hath a hundred times
Wooed me to steal it, but she so loves the token—
For he conjured her she should ever keep it—
That she reserves it evermore about her
To kiss and talk to. I’ll ha’ the work ta’en out,
And give’t Iago. What he will do with it,
Heaven knows, not I.
I nothing, but to please his fantasy. (Emilia III.iii.294–303)

Now, here’s the cake James made for Sunday’s Wine and Unwind:

Our Backstage Baker outdid himself this time, don’t you think?

Here’s the recipe he used, but really, you could make this with any sort of plain, vanilla cake.

Crustless Coconut Custard Pie Bars
NOTE from the Backstage Baker: The original recipe called for making it in a pie pan but handkerchiefs are square so I did a 9″square pan.  Of course.

2. In a medium bowl, beat together sugar, flour, and salt.

4. Add eggs one at a time, mixing well after each addition.

5. Mix in evaporated milk , then stir in the coconut by hand.

6. Pour mixture into pan and bake in preheated oven for 35 to 40 minutes, or until custard is nearly set and a knife inserted near the center comes out clean.

7. Let cool, then refrigerate before serving.

Here are some photos of the cast enjoying their napkin treat! 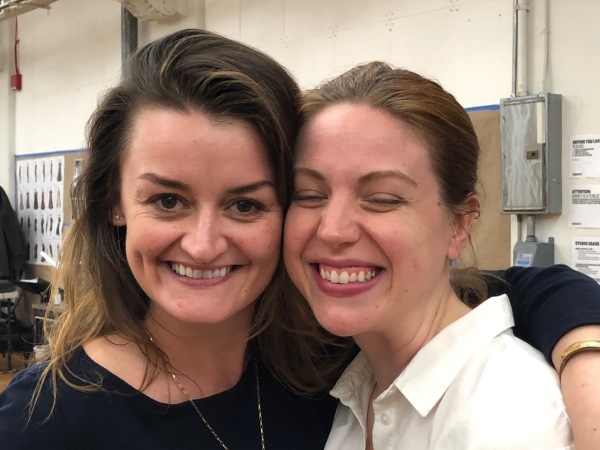